This is a very unfortunate case of a patient having two doctors who were unskilled for his two procedures. One procedure was done in Poland and the second in England. This is what everyone fears most.
Many doctors have little idea as to what they are doing and patients don’t understand how severe the consequences of using these doctors can be.

The good news is that it can be fixed or made much better. The patient saw over 100 examples of Dr. Bolton’s donor area post operative and made the decision to go out of his way to have the best doctor possible help restore him.

Due to his prior bad experiences the patient was not interested in a hair transplant. He just wanted his scars fixed. He was kind enough to let us use his story to help others who are going through the trauma of a bad result. Dr. Bolton was able to drastically change his fate and revise these massive scars and leave him with only a fine scar line that will be undetectable if he were to grow his hair out a little bit.

The goal of the surgery was just to excise one scar as that is the limit for one procedure. Dr. Bolton not only removed the top scar but was able to transplant hairs into the bottom scar and have enough left over to impact the frontal hair line.

If the patient desired, Dr. Bolton, could have also transplanted a good amount of hair into the frontal hair line, but due to the patients prior bad experiences he was not interested. 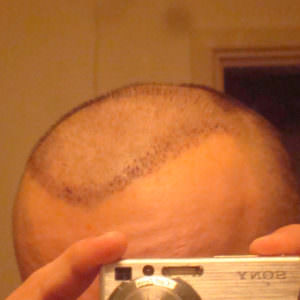 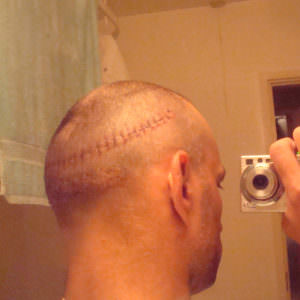